His Inscriptions
Life-Giving Communication with God​

Inscribe (v.), to write, engrave, or print characters upon.
​

Inscriptions are everywhere. We humans long to make our mark on this world, and from the beginning of time we have been finding ways to "inscribe," or record our thoughts. We have used tree bark, parchment, marble, clay, leather, stone, gold, and paper. We have written letters, pledged our love, carved our initials, branded our cattle, and embroidered our names. When God tells us in Isaiah 49:16 that He has inscribed us on the palms of His hands, some believe He is referring to the ancient practice of the Jews engraving a symbol of Jerusalem or the temple on their skin, to remember their walls.

At the same time, God has been longing to make His mark in us. He began by inscribing the law on stone tablets for Israel, but then spoke of a time when our stony hearts would become flesh. His laws - and even His Presence - would be within us.

God's Holy Spirit is said to be like a "seal" upon us, in both the Jewish writings and in the Christian New Testament. The Bible is God's love letter to us; to Israel first, then also to the Gentiles. Even creation itself reveals God's attributes to us. (See Psalm 19 and Romans 1:20). Historically, God sent patriarchs, prophets, and pastors to speak to His people and reassure us of His loving plan. Now, He has called us to do the same.
Paul speaks to the Corinthians as "living epistles;" believers are to be sent like "living letters" from God to the world around us, bearing His image and reflecting His thoughts. (2 Corinthians 3:3).

The Bible began as collections of letters and manuscripts, and many more letters about God exist than those that are in the Word! In fact, you could say that nearly everything we know about God, we know through inscriptions!

But there's a problem.

​We are often confused about what we are hearing from God. Seeing God's inscriptions is one thing; understanding them is another. Look at the image of the tree-carving, below. We can see that "C" loves "N", but does " K" love "O"? or is it a "D"? And who are "C" and "N," anyway? Carol and Nate? Charlie and Nancy? 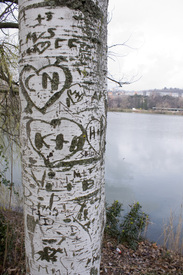 King Belshazzar had the same problem in Daniel 5, a story which birthed the cliche about the "writing on the wall."

The writing was easily seen, but its interpretation could not be discerned except by Daniel, who had developed enough intimacy with God to understand the message behind it.

When God called Jeremiah as a prophet, He trained him by first saying "What do you see?" Jeremiah correctly saw the rod of an almond tree. Once he identified what he saw, God gave him the ability to understand, or perceive: "I am watching over My word to perform it." Next, Jeremiah saw a boiling pot, facing away from the north. God caused Jeremiah to hear a prophecy that evil would come out of the north.

In the Gospels, Jesus taught that people were often seeing things but rarely understanding what they meant. (Mark 4:12). We need to both see and perceive; hear and understand. So our spiritual goal is to ask questions like: "how can we increase our ability to perceive what God is doing and saying in our lives today? How can we cultivate an "excellent spirit" like the one that was in Daniel, so that we are attuned to His ways and can spot His fingerprints, follow His leading, hear His directions?"

(*Note: For innovative ways to fit prayer into a busy lifestyle, including a printable infographic, click here!)

How do you see God making His inscriptions on your life? What do you do to develop seeing eyes and hearing ears?

If you'd like to know God and hear His voice better, join me on the journey at His Inscriptions! Through inspired teaching, prophetic words, and a community of prayer, you will benefit from seeing more of God's handiwork in your life.